In Honor of Dr. King

This week’s Assembly focused on the life and work of Dr. Martin Luther King, Jr. in advance of his namesake holiday next week.

The following is derived from Head of School Judith Foley Arnstein’s remarks at Assembly to Charleston Day students.

Throughout his life, Dr. King experienced a great deal of injustice. Over time, he decided that choosing anger and resentment was not the answer. Dr. King shared that to respond to injustice with hate was not the way forward. The way forward was with understanding and love. Dr. King’s guidance could not ring any truer today.

To honor Dr. King and his work, Mr. Oyama, Mrs. Young and the fifth grade shared a story about the Children’s March in Birmingham, Alabama in 1963. Fifth graders voices and sound effects were combined with images from the book “Let the Children March” by Monica Clark-Robinson. 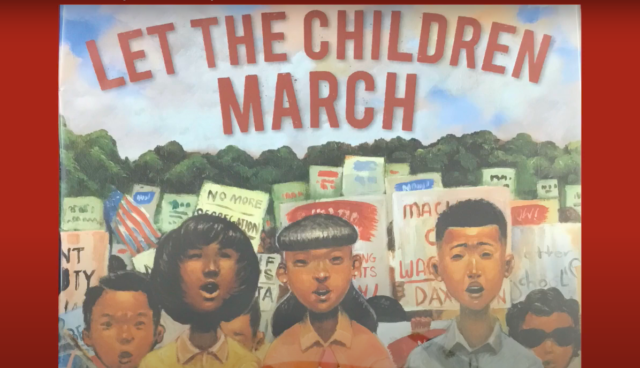 Shortly after the Children’s March, change began to ripple through our country. On June 11 of that year, President Kennedy stated, “Every American ought to have the right to be treated as he would wish to be treated, as one would wish his children to be treated.” Shortly after that, Dr. King addressed a large gathering in Washington with one of the most famous speeches in history – the “I Have a Dream” speech. In that speech, Dr. King dreamt of a world where all people were treated equally and with respect, a dream that “his four little children would one day live in a nation where they would not be judged by the color of their skin but by the content of their character.” The Civil Rights Act of 1964 was passed the next year.

In a talk Dr. King once gave to middle school students, he encouraged them to think about the blueprints or the plans they might create for their own lives. Each day, we have an opportunity, and the responsibility, to create the best versions of ourselves through the choices we make and the actions we take – in seeking the highest good, finding it through kindness, finding it by standing up – not standing by, meeting injustice NOT with anger and resentment, but with understanding and compassion. Each day, you can make choices that will honor Dr. King’s legacy. Choices that will reflect strong character. Choices that are informed by the mission of Charleston Day School.

All of you are astute observers – you notice everything that is happening in the world around you. You can see that there are problems to be solved and that perhaps the world that adults have created are not always perfect. Be thoughtful as you create your blueprint, lean on the tenants of character, scholarship, respect and responsibility. Choose to be kind.

Each of you has a great deal of power regarding how you help create the world around you – as you move forward in the world, choose understanding and love over anger and resentment. Choose to make a positive difference in the world.

Back to Character Education

On Tuesday, as part of their annual Day of Service, Charleston Day students were visited by representatives from Roper...

Each year, CDS third graders participate in their annual Read-a-Thon in which friends and family sponsor the students to...