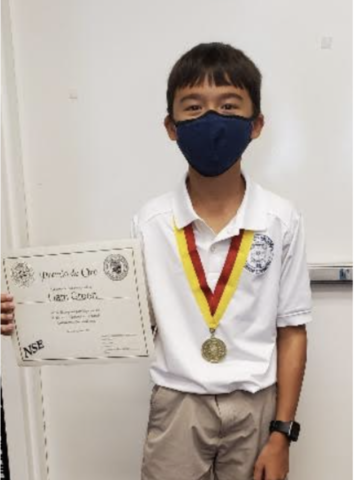 Liam G., then-sixth grader, won a Gold Award on the National Spanish Exam, ranking 1st in the state and 1st in the nation!

Congratulations to the students who placed well in the 2020 National World Language Exams and to the teachers who prepared them! Year after year, CDS student excel at the National French and Spanish exams, and this year, despite the pandemic, was no exception. Well done!

Le Grand Concours: The National French Contest of the American Association of the Teachers of French

Proficiency in a second language is an essential life skill in our increasingly global world. Charleston Day School’s World Language program focuses on developing global citizens who are adept at problem solving and communicating in a constantly evolving society. Beginning in Kindergarten and continuing through fourth grade, students are exposed to both French and Spanish before they select between the two for study from fifth through eighth grade.

Each spring, students in grades 6-8 take either the National Spanish Exam or the National French Exam. We are extremely proud of our students, who, on average, place above the 90th percentile on these National tests, bringing home gold, silver and bronze medals.