Every Charleston Day graduate can claim public speaking as a core competency. Public speaking instruction is woven throughout Charleston Day’s curriculum beginning in kindergarten. Those skills were demonstrated today as the fifth grade participated in the annual Dottie Rhett Speech Contest. 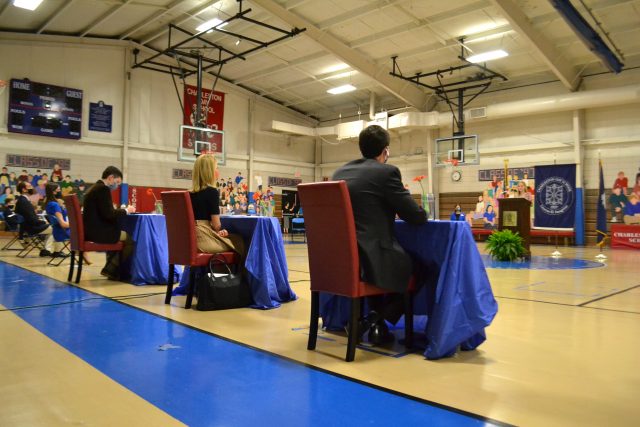 The contest was started in 1986 by language arts teacher Mrs. Dottie Rhett, who firmly believed that public speaking was a skill that every child should acquire. The contest was named in her honor after her death in 2014. We were honored to have her husband, the Rev. Dr. William Rhett Jr., in attendance again this year. 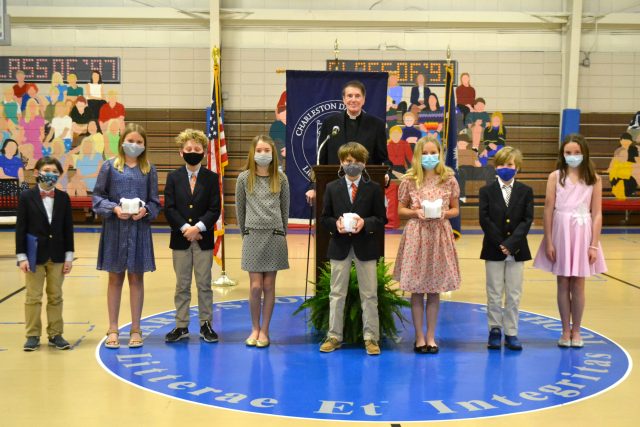 The speech contest is a favorite tradition of Charleston Day students and alumni. Students in fifth grade choose a topic of interest to them, research it and write a speech to be delivered in front of the class and in-house judges. This event follows months of preparing their speeches in class during a Writers Workshop. Students learn skills such as taking notes, forming outlines, and citing sources, following MLA style. From there, six finalists are selected to present their speeches in front of three external judges. Each fifth grader plays an important role, whether making formal introductions, acting as the Master of Ceremonies or giving a dramatic reading while the judges deliberate.

Dramatic readings ranged from excerpts from Martin Luther King Jr.’s “I have a Dream” speech and Amanda Gorman’s “Chorus of the Captains” to poems by Shel Silverstein and Presidential speeches by Dwight D. Eisenhower and Franklin D. Roosevelt. 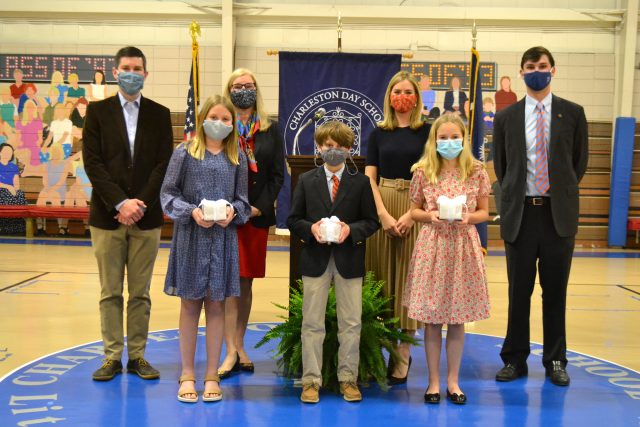 MR. MARK STACY is the Corporate Treasurer for William M. Bird & Company, Inc. and its parent company, Southern Diversified Distributors, Inc. William Bird was founded in Charleston over 150 years ago and today is a leading regional distributor of floor covering products.

Mr. Stacy is currently the president of the Holy City Toastmaster’s Club. The club’s mission is to provide a mutually supportive and positive learning environment where every individual member has the opportunity to develop oral communication and leadership skills. Mr. Stacy has been a member of Toastmasters for four years, where he has given over 40 speeches and has competed in several Toastmaster’s speech contests, including a third place finish at the Division Level in 2019.

MRS. SOFIA DESAUSSURE is a reporter and anchor for News 2. She joined the team in 2016 after graduating from Southern Methodist University in Dallas, TX, where she earned a degree in Journalism.

She started her career in Charleston as a weekend reporter and was soon promoted to weekend anchor. She is currently serving as an investigative reporter and the anchor of WCBD’s latest addition, News 2 at 4 PM.

Over the years, Mrs. deSaussure has covered Hurricanes Matthew and Irma and historic flooding along the coast. In 2018 she reported from Puerto Rico in the aftermath of Hurricane Maria. Working with Joint Base Charleston and the U.S. Air Force, she was able to fly on a C-17 for several relief missions stopping in New York and Texas.

Mrs. deSaussure was born and raised in Miami, FL and is a proud Cuban-American. When she’s not out in the field, you can find her spending time with her husband, Charlton, who is a proud Charleston Day school graduate and a red team enthusiast!

MR. THOMAS ROGERS (’09) was born and raised here in Charleston, SC. He is a graduate of Charleston Day School, Class of 2009. While at Charleston Day, Mr. Rogers was a member of the Red team and served as Red Team Captain for multiple years. He placed third in his fifth grade speech contest, speaking on one of his favorite topics, the Super Bowl. Mr. Rogers moved on to Porter Gaud High School, finishing there in 2013. He then attended Clemson University, graduating in 2017 with a degree in Financial Management and a minor in Accounting.

Mr. Rogers is currently employed with Merrill Lynch, where he is a Financial Advisor with the Chakeris Rogers Group in Charleston. He holds his Series 7 and Series 66 licenses and carries a Certified Financial Planner designation.

Mr. Rogers resides in Mount Pleasant and enjoys spending his free time on the waters of the Lowcountry with his dog, Blue, a one-year-old chocolate lab.