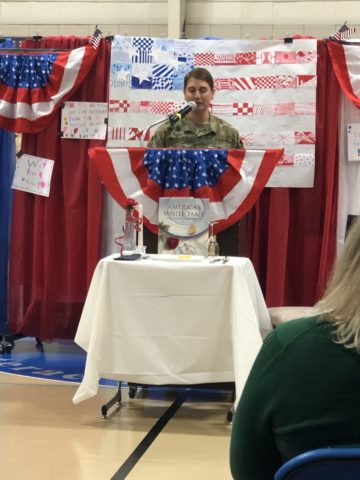 On Monday, November 11, 2019, the Charleston Day community assembled for Veterans Day. The group experienced a special campus visit from a local color guard comprised of active duty military from Joint Base Charleston. The color guard presented the colors for our Pledge of Allegiance and the National Anthem as well as a flag folding demonstration and explanation. The Air Force was represented well by Senior Airman Mischel, Senior Airman Snyder, A1C Gayton, and Senior Airman Limas Velazco.

The keynote speech was given by Dr. Jamie Elliott, a Major in the Army Reserves Medical Service Corps and Charleston Day School parent. Dr. Elliott spoke about the U.S. Armed Forces and how they are made up of five branches: Air Force, Army, Coast Guard, Marine Corps and Navy.