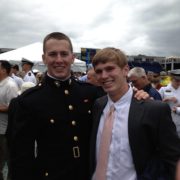 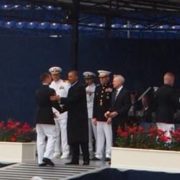 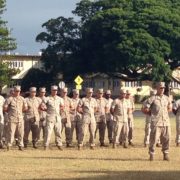 Red baby, all the way.

The 15 Archdale Street campus back when the school was only one class per grade.

A singular memory is hard to say, probably a tie between the Barrier Island Trip, and the 8th Grade French Trip.

4. Did other members of your family attend CDS?

Yes, there are a bunch of us out there. On my side of the family, my father Edward III graduated back before electricity. My brother Peter and my sister Celeste have both graduated. My father’s brother’s Randolph and Thomas Pritchard both attended the Day School. My first cousins: Thomas Jr, Sarah, and Harrison were/are Scorpions as well.

5. Where did you attend high school and college after you graduated from CDS? Were there any interesting turns along the way?

After graduating from Charleston Day, I moved to Northern Virginia for the boarding school experience at Episcopal High School. I loved every minute of that experience, and much like Charleston Day, would love to do it all over again if I could go back in time. My desire to serve, curiosity, and good fortune landed me an appointment to The United States Naval Academy (Annapolis) where I pursued and Bachelor of Science Degree with a major in Political Science (American Politics and Law). However, unlike Charleston Day and Episcopal, I do not feel the same desire to do that one all over again.

6. What was your first job ever?

I was a dockhand at Toller’s Cove Marina between summers at Episcopal. This position was courtesy of the late Robbie Johnson (’76), a great friend to me and my family, and a man with whom I feel blessed to have spent time with prior his passing.

7. What is your title in the U.S. Marine Corp and where are you stationed? Tell us about your path getting there.

I am a Second Lieutenant in the United Sates Marine Corps, which is considered a junior officer. I am stationed with and Infantry Battalion in Kaneohe Bay, Hawaii; and yes I surf as much as I can while still being considered a commissioned officer.

The path to get there was a very long one, in that I went to a four-year military college in order to receive my commission. In short, I made the process longer and less enjoyable than it otherwise would have been for most. However, I would not trade a thing. I feel extremely fortunate to have received, what I believe to be, one of the most valuable educations out there. I would add that only %20 of it was really even learned in a classroom.

Afterwards, I spent another six months braving the elements in Quantico, VA. Here, I learned the art and science behind warfare in one of the more physically and mentally draining leadership laboratories in existence. Afterwards, I moved from Quantico to Camp Lejeune, North Carolina, and spent several months learning how to logistically support anything from a team of Marines training to a battalion size amphibious invasion.

8. How did CDS prepare you for your military career?

In terms of skills that translate, it is hard to be specific. That said I would certainly credit my desire to serve in general to the teachers and faculty that make Charleston Day great. Andy Willits, Anne Cleveland, Brendon O’Shea, Kate Richardson, Hopie Parker, Scott Bergren, Jane Cook, Cam Metts, Louisa Parsell, Cristal Hawkins, Ellie Barr, Sister Rutledge, Margret Wilson, and Justine Finch all left lasting impressions upon me that I still reflect on today. I believe that the concept of service in general is not distinguishable by something as simple as a uniform or a title. The teacher is the all too often overlooked man or woman of true service in today’s world. A teacher does not hand out food, deliver humanitarian assistance, administer civil peace, close with and destroy the enemy, enforce laws, or build infrastructure. Their gift is more permanent, lasting, and can never be taken away from the beneficiary, unlike those aforementioned. The gift of education is invaluable, and what makes Charleston Day the School superior is the level of service these silent professionals are dedicated to bringing to the students daily. I try to uphold that very high standard of service, imbued in me at Charleston Day, in my career and in leading my Marines.

9. What do you do outside of work? (hobbies, interests, community service, etc.)

Because I now live in Hawaii, I do almost everything within sight of the beach. As I mentioned before, I’m picking up surfing as we speak. I will also try to scuba dive, spearfish, kite-board, and golf on most weekends. To anyone who has not yet been to Hawaii, I highly recommend it. Behind Charleston, SC it is the second most beautiful place I have been.

Bonus Question:
If you had a chance for a one year radical sabbatical what would you do and where would you go?

If money were a non-issue, then I would travel the world. However, the Marine Corps only pays me well enough to cover the rent and afford to watch Carolina Football all the way in Hawaii. Therefore, I would spend my time and resources conquering the country prior to the world. While, it is a much more manageable and financially feasible piece of earth to cover, I truly believe that we as Americans often overlook what is in our own back yard. As Charlestonians, this should not be a foreign concept to many of you. I would like to take a road trip and cover every state in the union, seeing what each has to offer. I have traveled outside of the country many times and will do even more of this with a major deployment all over the Pacific on the horizon, but some time back in the Continental US to see and do it all would be an awesome experience.