Our class began with 18 and graduated with 12 – four boys and eight girls. We were all really close and many of us still are. The traditions that Miss Tenney and Miss Stuart had for the school were a core part of our education: Blue and Red teams and the Friday relays. The annual spring badminton tournament; Commencement at the Dock Street and singing Speed Bonnie Boat, a Scottish song Miss Tenney loved; Christmas families and the FROG – that was such a big deal to bring your money to feed the frog for the Christmas families – dollar bills were lettuce and coins were carrots;  Eighth grade privileges – being the only class to come in the front door of the big building; playing murder in the eighth grade for our graduation party; taking the Christmas family gifts to the families. Midmorning snack of really hot milk in a little glass bottle with saltines and graham crackers were often torture. We had to show Miss Tenney or Miss Stuart that our bottle was empty before we could play on the playground. It was tough sometimes because the milk was so hot it tasted sour! The big building and little building — it was really special to move to the big building in the third grade. The plays we did –- in the first grade we did the Ugly Duckling and in the fifth grade we did Cinderella. These were such fun for me as we did not have regular special areas like music, art, and PE. 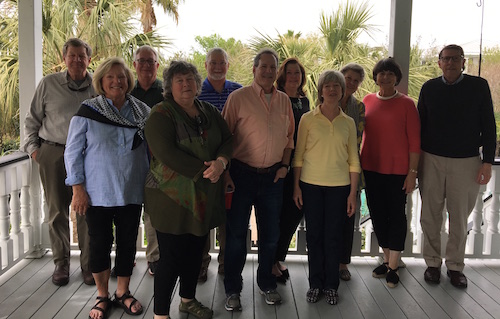 4. Do you have a teacher from CDS who stands out as someone who really impacted your life?

In the time that I attended CDS, most of the teachers were there for the long haul and many invested their entire life into the school. We were incredibly fortunate to have them as teachers.  Mrs. Covington and Mrs. Hummers were favorites of so many; I think of them with great fondness.  “Mrs. Cov” would threaten to cut off our ears and send them to Khrushchev if we did not behave. We were all terrified of the current Russian regime, so it worked. Imagine that today! Part of Mrs. Cov’s fifth grade year was to play the license plate game. We spent afternoons cruising parking lots looking for them.

I was very fortunate to teach at CDS with Mrs. Hummers and Mrs. Leland. Mrs. Leland taught us South Carolina history in the third grade. She also taught the Charleston Tour Guide course at the College of Charleston. I loved architecture and drawing, and Mrs. Leland made Charleston come alive for me. She not only knew an amazing amount about architecture, but she also knew incredible stories about each house and the generations of people who lived in them. I still have my notebook from her class and used it during graduate school. The Shark Teeth Finders’ Club was founded with a group from my class with Miss Wilson as our mentor. It was experiential learning at its best for the sixties. Miss Wilson truly inspired our imaginations and every treasure hunt for sharks’ teeth or artifacts was filled with adventure. She was our portal to archeology and discovery. I still love digging for them!

5. Where did you attend high school, college and graduate school after graduating from CDS? Were there any interesting turns along the way?

6. What was our first job ever?

Babysitting! I think I was around 12. My first job outside of this was working at Kanuga Conference Center the summer after the eighth grade. I worked in the canteen and helped with the children’s programs. I worked summers at Kanuga all through high school and college. It was the beginning of my yearning to have a summer camp one day. The summer after my sophomore year in college, my father insisted I get a “real job.”  I went to work for First Federal Savings and Loan and worked in the drive-in window at the Mt. Pleasant branch. The best part of this job was the bowl of tootsie pops I would give out to the children. After working for a month, my father asked me how the job was going, and I burst into tears and told him I hated it and never would work in banking nor did I think I would ever balance my check book and to please let me go back to camp. He realized then and there I was truly focused on a career working with youth. He told me to call the camp and see if I could work for the rest of the summer. I did and the director, Mr. Hartley, said to come as soon as I could get there. My mother called the church to see if anyone was heading to Kanuga, and I rode up with Mrs. Buist and her chauffeur, William.  Imagine doing that today! I have never looked back. Camp is in my blood.

7. Tell us about your life and role at Green River Preserve and how CDS may have helped prepare you for it?

In my early years after graduate school, I taught art for 20 years in private and public schools in Charleston. During the summers I still worked at camp. I always wanted to be a teacher; it started when I was three years old. When people would ask me what I wanted to do when I grew up, I would say that when I grow up I’m going to have a hundred children. Realistically, I only birthed four of my own, but over my years in schools and at camp, I’ve had thousands of them. I wanted to be a teacher who taught children outside of the box. I love learning, but I loved taking a subject and teaching it creatively more. It was like a game – a puzzle – to take a subject and make it into a multidisciplinary lesson and incorporate it into the entire curriculum of each grade level. I loved working with all of the grade level teachers to make it happen.  At some point I realized I was taking the “camp method” into the classroom. I wanted children in my classroom to be excited about learning. I am also a storyteller and love to write, so I incorporated stories into my lesson plans. I attribute this to many of the teachers at CDS. Miss Wilson and Mrs. Leland were masters at this. Many of the books Miss Wilson read to us, I read to my students. The teachers at CDS challenged us to think outside of the box. It inspired our imagination and sparked our creativity.

When my children were young, I ran my own art day camp in Charleston during the summer and over the Christmas holidays. I also ran an afterschool art program. In the late 1980’s I was offered a position at Camp Ton-a-Wandah as their program director. Three generations went to TAW, and I grew up hearing tales of my mother’s years there. For ten years I taught school and would pack up for TAW for the summer. Those were some of the most special years of my life. In the late 1990s, I married Sandy Schenck. Together we are the executive directors of Green River Preserve, a summer camp connecting children with nature. When I married Sandy, Green River Preserve was only ten years old. We celebrate our 30 year anniversary in 2018. The hallmark of our camp is to inspire the next generation of conservation leaders.  Western North Carolina is home to some 70 plus camps, and we are the young kid on the block.  We needed a niche – we hike the land – walk the talk. The Schenck family purchased the land known as the Preserve in 1953 for fly fishing and hunting. It is where Sandy spent his weekends and summers. The headwaters of the Green River bubble up in our backyard and six miles of it run through it. The 3400 acres of the Preserve serve as the setting for the camp. Campers spend mornings hiking with a naturalist and afternoons in camp activities. My main role at GRP has been as a program director – curriculum planner – and mom to all of the campers. I love designing creative programs. In addition to camp, I have been able to be the main force behind developing GRP’s School of Environmental Education (SEE), a residential school program we offer in the fall and spring. These programs meet the standards of education for North and South Carolina. Partnering camp with schools is a perfect marriage and something that has brought the way I love to teach full circle. I often think of Miss Wilson and the Shark Teeth Finder’s Club and the hours we spent digging up yards — archeology is a big part of camp. My niece, Martha Middleton Wallace, who is a CDS alumni, is our resident archeologist. Many of her digs with campers have unearthed some incredible finds. The sheer joy we see in children with these discoveries is very similar to the joy I felt each time I discovered a shark’s tooth. 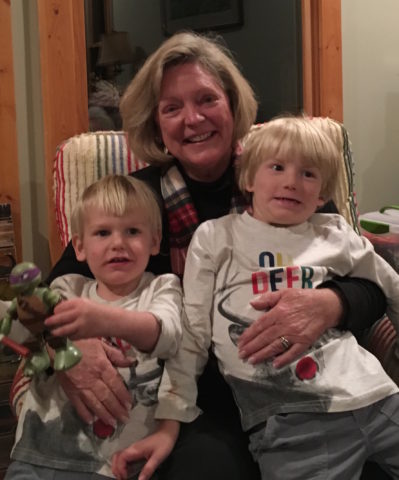 8. What do you do outside of camp?

Outside of camp – I love the beach!  Each year, we try to spend time in the Charleston area during the winter. I grew up spending summers on Sullivan’s Island in a family house we had. It is my happy place. I love to read, paint, draw, sew, hike, walk, boat, fly fish, travel, and WRITE. I’m never bored – there are just too many fun things to do. I have just finished my first children’s book and am in the process of getting it published. I can’t wait.

In the community, I have been very involved with the Flat Rock Playhouse for many years and with the American Camp Association – ACA. I’ve served on their boards and loved every minute of it. I’ve been involved with ACA on the national and regional level as a conference speaker and a contributor to Camping Magazine. Right now the article on my plate is Camps that partner with Schools. It is something that many camps are looking to do and we’ve been at it for 20 years. Most of all, though, I love spending time with our family. We are a close crew – together, Sandy and I have six children, four Izards (Jane, Anne, Edward, and Katharine) and two Schencks (Catherine and Laurinda). Three Izard children went to CDS. We have three grandchildren who live right at camp, and I am one spoiled granny. Our daughter, Anne Izard, and her husband, Steve, are the directors of the camp now, and Sandy and I are on the retirement end of Executive Directors.

9. If you had a chance for a one-year radical sabbatical, what would you do and/or where would you go?

The beach – I love to walk on the beach with my dog, Trout, and collect shells. The beach is a great muse for me and my happy place.  I also feel that way about the mountains — the difference now is that the mountains are now my place of work, so relaxing does not always happen.  I love the water and being around it; I am a sunshine person, so warm weather is where I would head. Spending quality time with my family during that year would be really important, too.