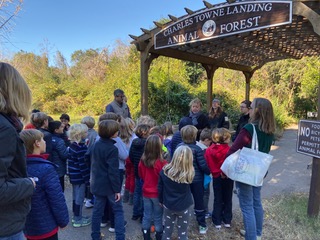 Last week, the second grade visited Charles Towne Landing State Historic Site. Charles Towne Landing sits on a marshy point off the Ashley River, where a group of English settlers landed in 1670 and established what would become the birthplace of the Carolina colony. There, the second graders took a tour through a “zoo” of animals that would have been present when the first settlers came to Charleston. The students saw a bison, red wolf, puma, bear, vulture, elk, and deer. The children also explored the Carolina, a replica of a 17th century trading ship that brought the first settlers to Charleston, as well as a dwelling that would have been built during the first settlement.

Back to Off-Campus Learning

The second graders visited The Old Exchange and Provost Dungeon last week to kick off their Spring study of Charles Towne...