Congratulations to Wando senior and CDS graduate Virginia Howell (’14), who was recently awarded the Fellowship for Art History at Sewanee, where she will attend this fall. As part of her application, she wrote about her experience at Charleston Day School in the Junior Docent program. 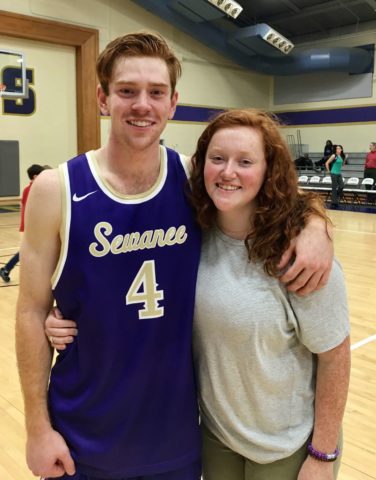 She remembers walking to the Gibbes Museum of Art each year to listen as the eighth graders taught the students about the artwork. In an essay she submitted as part of her application, Virginia wrote: “From first to seventh grade, I went to the Gibbes at least once a year, if not more, and I counted down the years until I was able to do my junior docent project at the museum.”

The students first visit the museum in January to select a piece of art they want to study further. Over the following months, they research the artwork and artist to become an “expert” on their piece. Then, they invite the younger students to share what they’ve learned.

“The entire project is incredible,” said Ginger Howell, Virginia’s mother. “I hope CDS will continue to offer this fabulous opportunity.”

In high school, Virginia continued to pursue her passion for art by completing a semester internship at the Gibbes. She will attend Sewanee this fall, where her brother Taylor (CDS ’10) is completing his senior year.

The Manigaults and the Pinckneys

The following is an excerpt from Virginia’s application essay to Sewanee. 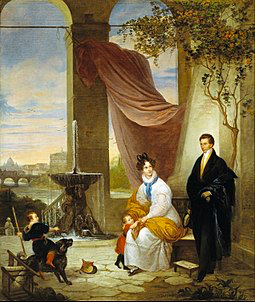 “Charles Izard Manigault and His Family in Rome” by Ferdinando Cavilleri, Gibbes Museum of Art [Public domain], via Wikimedia Commons

The painting I chose was Charles Izard Manigault and his Family in Rome, painted by Ferdinando Cavellari in 1831. We had to research the historical context behind the painting and choose an essay topic to write about. I chose to write about the elite families of Charleston in the colonial days, such as the Manigaults and the Pinckneys. In doing this research, I found out more about the history of my hometown. In addition, we researched specifics about the art and the artist.

Charles Izard Manigault and his Family in Rome pictures Charles Izard Manigault, his wife, and his two children. It was Charleston tradition to have a family portrait painted while traveling, and this one was painted while they were in Rome as a part of their “Grand Tour.” The artist, Ferdinando Cavellari, was an Italian history and portrait painter. The view pictured behind the family depicts Papal Rome with the dome of St. Peter’s Basilicia in the background.

The Manigaults were an elite Charleston family in the eighteenth and nineteenth centuries. They were plantation owners, local legislatures, and war heroes. Pierre Manigault was a French Huguenot who settled in South Carolina and became a successful rice planter. Pierre grew his family to become a dominant family in the area, and eventually the name Manigault became well-known. A descendant of Pierre, Peter Manigault, who lived from October 10, 1731 to November 12, 1773, was the wealthiest man in the British North American colonies when he died. Peter’s son, Gabriel Manigault, was a famous Charleston architect who designed the Joseph Manigault House located in downtown Charleston at 350 Meeting Street.

Cavellari’s use of colors is important in Charles Izard Manigault and his Family in Rome, as well as the postures of the individuals. He painted the wife in white, representing her purity and innocence; the children in red, representing their youth; and the father in black and gold, representing his status. Charles Izard Manigault is standing erect in this family portrait as he would have in a regular portrait of the time—he looks elegant and high-status because of his proper posture. On the other hand, Cavellari painted the children playing, to emphasize their youth. It was more common at the time for family portraits to be posed in proper posture, but instead, the children in this painting are riding on dogs and knocking over chairs. Despite the difference in the sitters’ posture, Cavellari used a different common characteristic of portraits from this time period: the curtain hung in the background. The light in Charles Izard Manigault and his Family in Rome draws attention to the main character of the painting: Charles Izard Manigault. The wife and kids are all looking at Charles Izard, which also draws attention to him.